No one knows exactly what was going through Alexander Vasilyev’s mind when he decided to draw four stick-like circles for the eyes on two of the once faceless figures inhabiting Anna Leporskaya’s painting worth of £700,000. three digits. It was his first day of work at the Boris Yeltsin Presidential Center in Yekaterinburg. He worked shifts for a private security company. The pen he used was a souvenir ballpoint pen snatched from the museum’s gift shop. He would later claim that some teenagers visiting the center had encouraged him and that he thought the painting was just a “child’s drawing” and not a classic work by an important Supremacist artist worthy of millions of rubles. After completing what Alexander Drozdov, the center’s executive director, called a “smashing performance”, Vasilyev told his colleagues he was not feeling well before exiting the museum and walking away – presumably to never come back. “He made a stupid mistake,” Drozdov said.

From the infamous ‘Monkey Christ’ restored by eighty-one-year-old Spanish retiree Cecilia Giménez to the Sanctuary of Mercy de Borja church in Zaragoza, the press and public have been mesmerized by tales of great art mutilated by those in charge of its stewardship. It’s become quite the topical genre — and fraught with more than a hint of snobbery. The unfortunate disfigurers are inevitably portrayed as mindless country folk unable to recognize the value of the masterpieces they are supposed to have ruined. The reader of the story is granted the comforting fantasy of his own superiority, the reassuring certainty that of course he would never commit such wanton philistinism (though I wonder what percentage of those who smugly mocked the christ monkey of Borja or characters freshly unmasked in Ekaterinburg had never heard of Anna Leporskaya or Elías García Martínez, original painter of the Zaragoza fresco). At the same time, the narratives fulfill a disciplinary function, reminding a mass audience increasingly solicited by visual art institutions of the appropriate attitude of restraint and non-intervention in the presence of monuments of high culture.

In his 1997 book The destruction of art: iconoclasm and vandalism since the French Revolution, Dario Gamboni notes the emergence of the word “vandalism” in France, coinciding with the arrival of the first major European public collections at the beginning of the 19th century. In particular, he describes a “little-known engraving from the 1843 series entitled The French during the Revolutionin which a revolutionary in tattered pants is captured disfiguring a rather “wise” old sculpture. “The crude appearance and “primitive” characteristics of the sans culottes point out not only its low extraction,” writes Gamboni, “but its underdeveloped nature (and, in the physiognomic tradition, perhaps also its criminal nature).”

But what if the vandal is not a worker insurgent or a supposedly ignorant Russian security guard but a famous artist himself, endowed with a cultural capital (almost) equal to the works of art he is caught vandalizing? How does the meaning of such iconoclasm change when we are allowed to assume the agency and intentionality of the iconoclast? 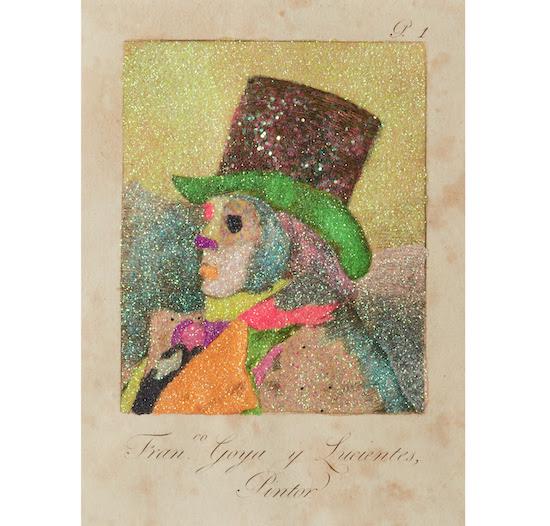 A new exhibition titled ‘Bad Manners’ at London’s Luxembourg & Co. gallery, co-curated with Jake Chapman, explores a variety of official – and not-so-official – collaborations, occasions when artists have slyly sabotaged or subverted work of their peers and parents. It’s a show about creators coming together – and falling apart. It is also an exhibition about power and about the creation – and sometimes destruction – of value in the world of global art.

In 1987 Martin Kippenberger bought a 1972 Grau painting by Gerhard Richter, a monochrome gray canvas thick with visible brushstrokes, screwed four metal legs to its corners and transformed into a coffee table. After buying the original at auction at market value from Richter, he then sold the work as his own under the title, Inerconti model. By all accounts, he lost a significant portion. In fact, as we walk through the exhibition just before the opening, gallerist Alma Luxembourg suggests that you could probably increase the value of the work even further simply by cutting off the table legs and hanging it on the nearest wall. .

For Luxembourg, however, the “worst manners” exhibited in the gallery are found in a Untitled by Jean Arp from 1947. A committed Dadaist and regular at Cabaret Voltaire, Arp had for some time incorporated fragments of torn paper into his canvases, but after the death of his wife, Sophie Taeuber-Arp in 1943, he tore and pasted into one of his suffocating abstract canvases a drawing of his own – all intersecting lines and dots, like a network of train tracks on an abstract territory. The work was seen as an act of mourning or commemoration, an attempt to “continue” his wife’s work after her death. It could also be seen as an act of anger, or even violence. Significantly, this is the only example in the exhibition of works by a female artist having been vandalized.

But for Chapman, such acts of apparent shipwreck – as well as others in the series by Wade Guyton, Sherrie Levine and Marcel Duchamp – far from being cruel or unpleasant, represent the crucial break with the past that opens up the very possibility of modernism in art. Think of Duchamp’s cheeky mustache on the face of the Mona Lisa, of Surrealism’s foregrounding of different types of conscious and involuntary collaboration, of the stark irreverence of Olympia’s gaze in Manet’s famous painting. In a sense, the avant-garde has always been iconoclastic through and through.

Bad Manners is full of artists coming together – and also going their separate ways. Jean-Michel Basquiat and Keith Haring are seen swapping a marker back and forth on their Untitled (1980) works with its capitalized caption: “OK SO WE DOD SUPPRESS THEIR TAR ROOF TAR ROOF TAR ROOF”. We see Richard Prince and Cindy Sherman dressed in matching black suits and Beatle wigs for a double portrait from 1980, published in an edition of ten color prints – which later became two separate (but identical) editions of ten each when the couple s ‘is separated. So it’s perhaps fitting that Jake Chapman chose this moment to announce that he and his brother, Dinos, a two-person art act who together had been nominated for the Turner Prize and hosted an edition of All Tomorrow’s Parties, had decided at the start of the pandemic to separate and now work as two separate individuals. I guess that means they can now start vandalizing each other’s work, instead of bombarding old Goya prints.

How To Make Assertiveness Work, Based On Science |

Use weather reports to analyze when officials are working from home, suggests Rees-Mogg