Currently, up to 53% of intellectual staff have participated in the gig economy involving the exchange of labor for money between individuals or companies through digital platforms that actively facilitate matching. between suppliers and customers, short-term and on a pay-per-job basis. .

Yesterday, Anphabe hosted a conference to announce the list of the top 100 best places to work in Vietnam in 2021. The survey program was conducted by Anphabe under the sponsorship of the Vietnam Chamber of Commerce and Industry (VCCI). As a result, Nestlé Vietnam was voted the best place to work in Vietnam 2021 for the first time.

At the conference, Anphabe released a detailed report on the big changes in the Southeast Asian country. These are three notable changes in Vietnam’s human resources in the current volatile period.

According to Anthabe’s Managing Director and Inspiring Happiness Thanh Nguyen, the combined work has been popular. In addition, young intellectuals prefer independent work. Finally, collective redundancies and business travel are on the increase.

As a result, more intellectual staff want a hybrid form of work – A hybrid work model allows some employees to work from home while others work on site. The hybrid has been touted as the future of work. The trend was popular after the pandemic around the world and Vietnam is no exception. 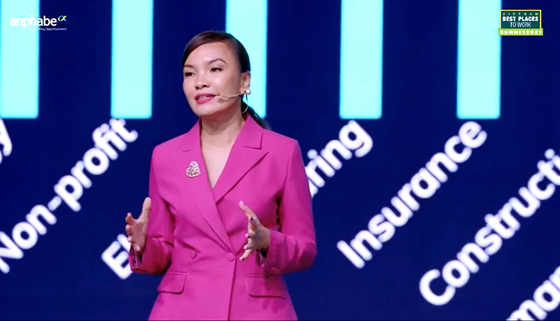 According to the results of an online survey conducted by Anphabe, only 40% of informed workers want to return to the office completely while up to 56% of them prefer to opt for a hybrid job. In particular, 4% of them have chosen to quit their job in order to turn to self-employment and thus have the possibility of choosing where to work.

The hybrid working model creates flexibility in time and place of work, saving travel and catering costs and creating a sense of comfort for employees.

Some companies have required employees to report to work during the social distancing restriction, in large part due to the nature of the work; however, many senior executives are used to having employees in the office.

Hybrid work is a clear trend of the future, especially for office teams whose nature of work can be done in multiple locations. As a result, companies wishing to attract and retain talented people, they should consider applying this new trend of work, Ms. Thanh Nguyen suggested.

In the coming times, due to the impact of Covid-19, the number of full-time freelancers is expected to decrease from 1% to 13%; But the number of part-time freelancers will increase, bringing the total number of knowledge human resources in Vietnam participating in the gig economy to 57 percent, clearly demonstrating this trend.

In addition, young intellectuals prefer independent work; In addition, mass layoffs and job changes are on the rise.

There has always been a paradox in human resources. Despite the high unemployment rate, the staff turnover rate is also extremely high – up to 6 in 10 people are actively looking for a new job. This paradox has been observed in the Americas, Europe, Asia and now Vietnam, with the common name of the Great Resignation – also known as the Big Quit, an economic trend in which employees voluntarily resign from their jobs in mass, from the beginning of 2021..

Experts predict that with the prolonged effect of Covid-19, not only the “super job-hopping” group but also the standard group of employees are also prone to fall into a state of fatigue, fluctuating and they will decide to leave . Therefore, companies must take care of the health of the employees to overcome this difficult time as well as limit the unfortunate losses for the organization.

Some modest proposals for governments. DeSantis and Abbott will continue their great work