“It’s one of the best things I’ve ever done in my life. I’ve had lots and lots of jobs, but for me the satisfaction and rewards are huge and the team is amazing.

Cathy Phelan from Castlemartin Lodge, Kilcullen, has been volunteering at the Punchestown Covid-19 test center for over a year now.

“In fact, I had worked with Covid and saw that they were desperate for volunteers. I was still working, but I wasn’t busy as I was taking care of the reservations for the Gilltown Stud private house, but obviously nothing was happening because of Covid, ”she says.

“I’m not a nurse, I can’t take care of people, but I wanted to help.

“I actually work for the Aga Khan and a few years ago His Highness celebrated his Golden Jubilee. When people wanted to give him gifts, he said that instead, he would like people to give a gift of their time – to help someone else. It has always marked me.

“So you know what, this is my gift of time, that’s exactly it.”

Cathy first donned her special PPE gear and took her place at the Punchestown Testing Center in August 2020. Since her own job resumed she has not been able to donate as much time but continues to volunteer weekends and evenings.

“At first, people were so worried, so stressed. They would park in their cars and some would cry, they would worry for themselves, for their family members, to pass it on. It was just awful.

“There were a lot of deaths back then and people couldn’t attend their funerals. “

When meeting someone who was particularly upset, Cathy and the volunteers used to steer the car aside and talk to them out the window.

“We were often the only people they saw. Many of them were isolated, they could not bring their sons or daughters with them. They had not seen their grandchildren or friends.

“They would just go to Punchestown and go straight home, not seeing anyone. They were so happy to have someone else to talk to.

At first, she points out that they mainly saw people aged 50, 60, 70 and 80; but over time the ages got younger and the kids started being tested once they went back to school and started playing with friends again.

Cathy is based in the test center, and she’s often the first face people see when driving.

She walks up to the car window and gets the contact details of the person being tested, goes to reception, collects the forms and makes sure the details are correct.

She places them under the wiper so the client does not touch them and directs them to the test booth where the doctor takes the swab.

“Many volunteers have had to cut back on their hours because they have had to return to their jobs as the economy opens up,” she says.

“Lots of volunteers walk a good distance to Punchestown. Some of them didn’t know where Punchestown was until they volunteered.

“I have met the most amazing people, from lawyers to pilots, from all walks of life. The doctors and nurses were just lovely.

She emphasizes that the whole team is truly one
caring group.

She said some people had submitted CVs looking for employment at the testing center and were surprised to learn that volunteers are not being paid.

A large majority of those vaccinated really appreciate the work of the volunteers, giving them cakes, cookies and buns.

However, sometimes volunteering can be difficult.

“Sometimes people can be pushy or give up, but we don’t mind.

“We just take it, they just act like that because they’re worried. It’s fear of the unknown.

“It’s phenomenal. I will continue volunteering. I like to help. The people I met there are amazing.

Caroline Morrin has been at the forefront of the volunteer effort from the very beginning. Following the nationwide lockdown on March 13, 2020, the Robertstown resident intervened when a testing center was set up at St Conleth’s C0mmunity College in Newbridge. In July, the tests were moved to the parking lot of the Keadeen hotel.

“In August we went to the Keadeen parking lot in the morning, then we all headed in a convoy to Punchestown that afternoon, all the volunteers, HSE staff and army went to Naas and settled in. “Caroline remembers.

“At first they didn’t know how contagious or dangerous Covid was. We were dressed with hair from the top of the head to the bottom of the toes – mask, visors, glasses. Nurses helped us to undress safely as all PPE equipment had to be disposed of safely. People must have been afraid when they saw us when they came to do tests, we were like astronauts. It was like we were in one of those weird movies, ”she says.

The Volunteer Coordinator got involved when she contacted Kildare’s volunteer network. She helps coordinate up to 100 volunteers during peak hours with a group of 30 to 40 people.

Completing the lists and making sure they are taken care of is her priority.

She is very proud of the volunteers. Currently, between 650 and 750 tests are performed in Punchestown every day.

“It’s so special to be involved in it. There is a real warmth and a real team spirit. For the vast majority, the public really appreciates the work of volunteers and HSE staff.

“It’s really rewarding to be involved. We have a lady who is only in the country on weekdays and she volunteers on weekends while her husband takes care of their child. It’s a great way for her to get to know her local community.

Conor Maguire from Brannockstown began his own Covid-19 volunteer journey in September 2020.

He’s joking ; “I like to think I’m running the show. I meet and greet people. We’re the ones who put you at ease, show you where to go and tell you what’s going on.

He was based at the mass vaccination center but was transferred to the testing center when it was completed.

“I’m semi-retired, so I normally work Monday, Wednesday and Friday. At first I was doing four days and five days some weeks. We started with 40 volunteers. It’s different. You work four hour shifts, ”he says.

He points out that some of the volunteers live a significant distance from Punchestown.

“Two sisters are from Celbridge – it’s a decent distance. “

Despite the gravity of the situation, Conor puts people at ease.

“It was fantastic, it opened my eyes. It is very very pleasant. The HSE heals us, feeds us, dresses us and that’s ideal.

“Ninety percent of the people you deal with are good, you have a few cantankerous ones but you laugh, there were some funny times too.”

“You joke with people and the kids are bright, very funny. There is a lot of craic.

He points out that the people have been very nice, bringing boxes of chocolates, candies and cupcakes.

“One day, I was not there, an ice cream van came and gave ice cream to everyone. It’s nice to have this recognition.

Covid may have ended Órla O’Connell’s travel plans, but the Naas resident has decided to step up and volunteer at home.

Initially placed in the vaccination center, she is now in the screening center. 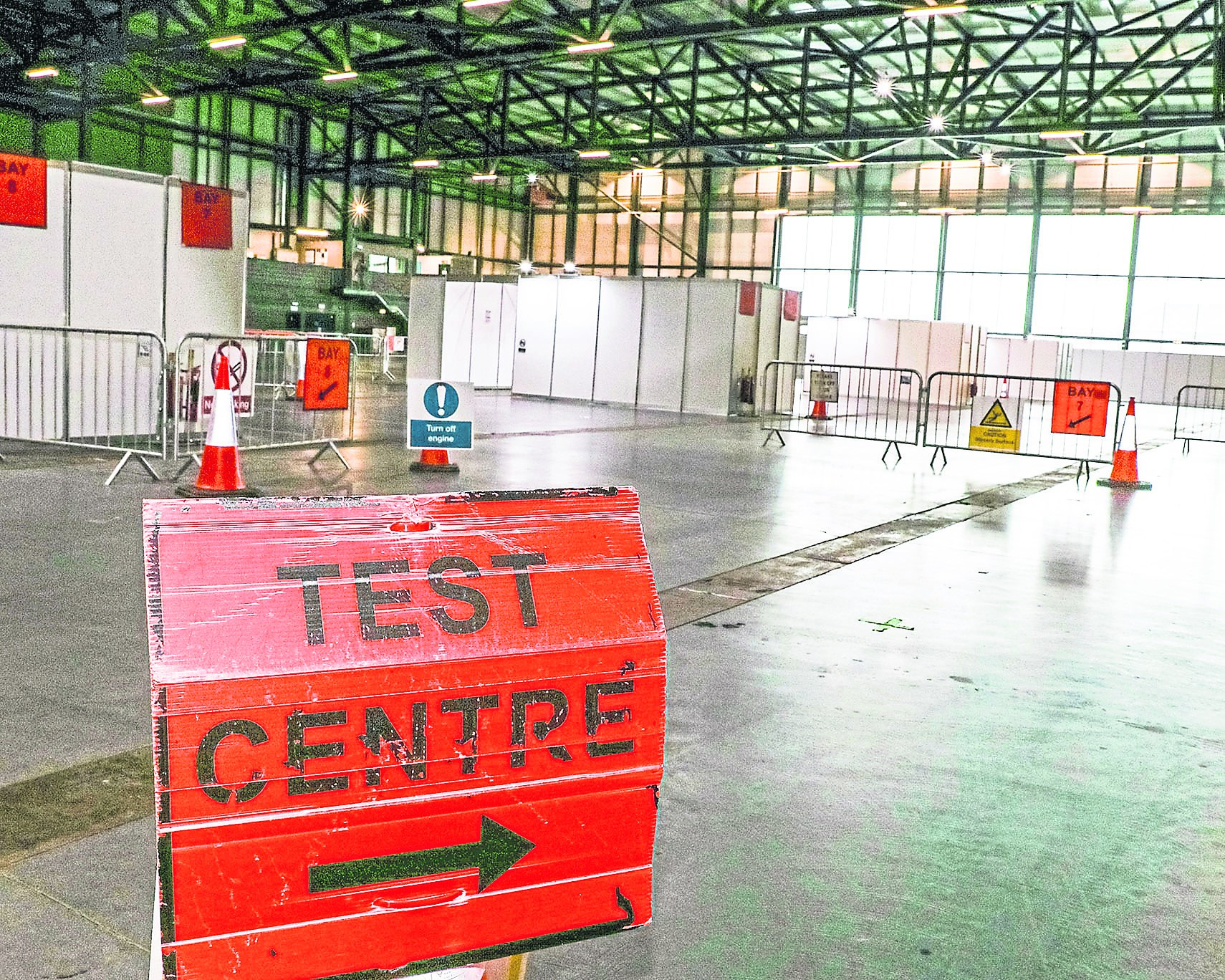 Also part of the meet and greet team, she explains that there is a strange person who has never been tested before, but the vast majority of people have already been swabbed.

“You’re up most of the time, but you get your breaks. John Murray is the supervisor and acts as a liaison between the volunteers and the HSE.

“I think it’s great because I’ve always traveled but Covid put an end to that and between golf and volunteering, it gives me focus. The HSE staff are friendly and we laugh.

Orla is delighted to be vaccinated, which gives her greater protection.

“You wear gloves, you make people put the window two-thirds up so that you have a barrier. The risk and fear have been reduced. We have all the equipment, ”she explains.

“People sometimes arrive late for their assigned tests. He slows down at lunch. The queues of cars can sometimes reach 50 to 60. “

The former teacher is very happy to volunteer her time, having done a lot of volunteering abroad.

“I like the idea of ​​being a volunteer,” she says.

When she retired, Órla visited India, Gambia, Peru, Thailand and taught in many places. As part of the Moldova project, she volunteered in the orphanage there.

Volunteering is not easy for everyone and this group of people all have something in common.

They are ready to give of their time for the greater good of society and this can only be applauded in the highest degree.

How To Make Assertiveness Work, Based On Science |

Use weather reports to analyze when officials are working from home, suggests Rees-Mogg